How to Handle Scope Creep

Imagine a force possessing the ability to suck even the most competent, well-trained, highest-functioning humans into its depths.

With each frantic movement, it pulls its prisoner further into the muck, creeping up closer and closer to the nose and mouth… threatening the very things that provide a body with its life-giving breath. All the while, the entrenched captive is forced to watch, horrified and panicked, while each desperate maneuver is met with more life-draining suction.

Sounds like a pit of quicksand in a 1980s adventure movie, right? Well, it’s not. It’s called “scope creep,” and it can absolutely suck the soul out of your freelance business.

There’s a chance you may not be familiar with the phrase itself, but there’s an even bigger chance that you’ve fallen head-first into the phenomenon, viciously cursed about it, and lost hours of precious sleep in a cold sweat over the whole affair.

To put it simply, “scope creep” is when a project you’ve taken on slowly creeps into amounts and directions of work that weren’t previously agreed upon.

This costs you time, and, in the freelance world, time is almost as important as oxygen. When you perform work that hasn’t been previously discussed, you’re putting in hours that cannot be properly billed. Wouldn’t you rather be putting in work that you’re actually getting paid for?

The problem with scope creep in project management is that it doesn’t usually start out looking like a problem.

Scope creep is a tranquil-looking pit of quicksand; you don’t know you’re in trouble til you’re knee-deep.

It can start out innocently enough… a color change on the client’s business cards, perhaps. (That’s no big deal.) Soon, the client realizes they want the entire project done in the new color. (All right. That’ll take a while, but okay.) Suddenly, the new color scheme reminds the client of a logo idea that came to them in a dream. They would like the branding to better-resemble this dream logo, and that this should still happen within the original time-scheme.
(Nope. No, sorry, that’s just not happening.)

Start with a contract.

No, seriously. Start with a contract.

It is imperative to start with a contract or, at a bare minimum, a detailed description of your project’s scope (what it includes and does not include). By doing so you’ll be able to step right around that quicksand pit without even scuffing your shoes.

No matter what field you’re in, you are a business person providing services and conducting a business transaction with a client. A contract presented at the forefront of a project should not come as a surprise to either party. It will allow you to explicitly draw out the goals and expectations of the project by outlining deadlines, amounts of work, desired outcomes, revisions, and payment.

There are various reasons for this, but the two main ones are understanding and protection. One of the primary goals of a contract or scope description is to cultivate a clear understanding of the project for all parties involved. At this point, you can outline concise protocols for events that might require more work than the original scope called for.

And then there’s protection… legal protection, of course, but also protection of your extremely valuable time. Time is a precious resource for a freelancer, one that is usually plotted out down to the second. Some time is for making money, while other time is for enhancing your quality of life, be it family, recreation, or anything that brings you happiness.

Spending time on a project that sucks value from your personal time as well as money from your pocket is not a sustainable way to run your business.

Obtain a contract, protect your time, and ultimately prevent that quicksand from creeping up to your middle… and we’re not just saying that because we’re in the eSignature business.

Okay, sure. This post is titled “How to Handle Scope Creep,” right? That’s suggesting the creep is already happening… so how do you turn things around? If you’re already knee-deep in a project and starting to feel a sinking feeling, don’t freak out. With both quicksand and scope creep, the best action you can take is to stop. Stop digging yourself a deeper deathtrap by working overtime without proper compensation.

If you’re feeling like the client is taking advantage of your time, or simply that you’re doing a lot more work than you had planned, it’s time to take a moment to stop and honestly assess the growth of the project.

Calculate the extra hours and their cost in relation to your rates, collect any records (or emails) you can find of the original agreement, and give yourself a visual picture of the scope creep, so there can be no doubt in your mind about the situation. It can be a genuine shock to crunch the numbers and see how much time you’ve actually spent on a project, and how much money you’ve actually been losing.

You may be tempted to silently work and appease the client in order to ensure loyalty and avoid confrontation and critical reviews, but in doing that, you’ll set a dangerous precedent. Rather than one of mutual understanding and successful projects, you’ll have set a precedent of wishy-washy project descriptions, neglect of your professional needs, and a whole lot of uncompensated bending over backward (try buying groceries with that).

It’s not too late to find a branch to grab onto. Even if you’ve begun the project without a contract, you still have the ability (and the right) to revisit the original project discussion and remind the client of the initial agreement. By doing so in a written, documentable form such as email, you’ll not only be creating a reference for both parties, but also providing yourself with proof of the agreement, should you ever happen to need it.

Be positive. Be thorough. Be honest.

Once you’ve gotten your details in order and a plan in place, it’s time to present it to the client—and that can be an intimidating prospect. The fact is that you’ve got to keep your head above this scope creep if you want to make it as a freelancer, and the only way to do that is to tackle it head-on.

When it comes to the approach, it’s important to remember that the client is probably not trying to take advantage of you.

When an official agreement isn’t originally presented, it can be difficult (for both parties) to discern boundaries and limitations, and there’s a good chance that your client had no idea that any professional lines had been crossed.

Keep the dialogue upbeat and trusting, but be clear and concise. As much as you might want to hop on the phone and blurt out, “Hi, Client! I desperately want to keep you happy, but I’m drowning in the time-suck of your endless revisions,” it might be a better way to approach it like this:

“Hi, Client. I’ve been putting a lot of work into these revisions, and I think it might be a good idea to go over our original agreement again, just to make sure we’re on the same page.”

“I understand how much you want this to be perfect, but I hope you also understand that revisions take time, and I think these are taking more time than we originally talked about.”

You could even give the client a few options, granting them a hand in the decision and a nice, comfortable sense of control.

“There are a few ways we can approach this, and I look forward to hearing which one works best for you.”

If you start out by giving your client the benefit of the doubt and keep the conversation upbeat and positive, chances are you’ll be able help each other out of the muck without any damage.

What if you’re not well-received?

Sure, there’s always a chance that your client could surprise you (in a bad way) and balk at your approach. In this case, you’re going to have to protect your best interests.

The perfect #gif to describe #scopeCreep. The subtle nod from a beast who will chase you with an axe. #ProjectMgmt pic.twitter.com/qqYUB3IH50

Saying “no” to the client can have varying repercussions, so be sure to document each conversation, especially if it’s in-person or on the phone.

Conduct yourself in a manner that you wouldn’t cringe over in the future, and maintain your quality of work, even if the agreement is coming to a sooner close than you originally anticipated.

“You want a satisfied client, but you need to be a satisfied freelancer—sometimes you just have to say no”

Learning how to handle scope creep while it’s happening will better equip you to avoid future losses of money, time, and sanity.

Few (if any) clients are worth becoming completely submerged in that kind of entrepreneurial quicksand. 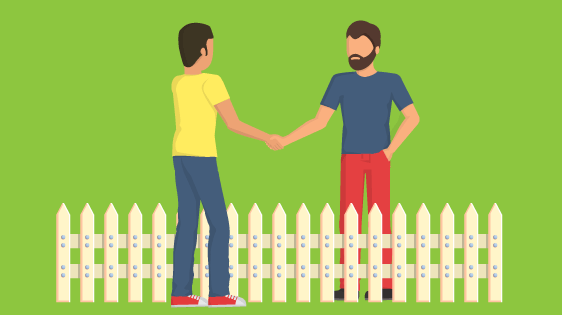 Freelancers: How to Set Boundaries while Freelancing

How to Calculate Your Hourly Rate (Without Making Your Brain Hurt)

How to Handle Scope Creep

Imagine a force possessing the ability to suck even the most competent, well-trained, highest-functioning humans into its depths. With each...